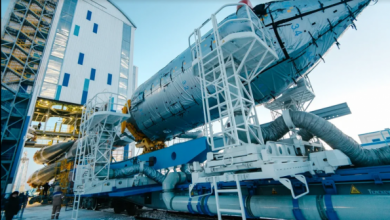 VOSTOCHNY COSMODROME—A Russian Soyuz-2 rocket, outfitted with a Fregat upper stage, was being

prepared for launch from here in the Russian Far East on Dec. 27, marking the country’s 17th launch of the year,

placing it behind China and the U.S. in annual number of orbital launches.

The 167-ft. (51-m) three-stage Soyuz was rolled out to its launchpad on Dec. 24 in the midst of Siberian winter, with

Dec. 26 when the rocket is scheduled for launch, but the only weather concern will be the briskness of upper level

Mounted inside the 12-ft. (3.7-m) dia. payload fairing are the Russian government’s Kanopus-V 5 and 6 Earth

The rideshares were arranged by GK Launch Services, which was established by the Russian space agency

The Dec. 27 launch will be Russia’s 17th and final orbital launch of the year, tying 2016 for the lowest annual flight

China, which was scheduled for its 41st flight of year on Dec. 29, finishes 2018 ahead of the U.S. in orbital launch

activity for the first time since 2012. United Launch Alliance (ULA) is aiming to close the year with a final Delta IV

SpaceX accounted for 21 of the U.S. flights, including the Dec. 23 launch of the U.S. Air Force’s first GPS III satellite

on Dec. 23. ULA has completed eight, with a final mission for the National Reconnaissance Office planned for no