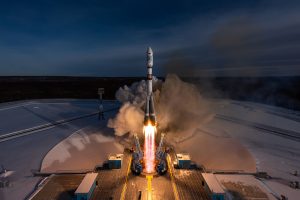 VOSTOCHNY COSMODROME, Russia—A Russian Soyuz-2 rocket lifted off from here in the Russian Far East onDec. 27, marking the country’s 17th launch of the year and the commercial debut of the government’s new Soyuz-2 launch serv

The 167-ft. (51-m) Soyuz-2.1 rocket, outfitted with a Freget upper stage, soared off from the icy, windswept plains of Vostochny at 11:07 a.m. local time (9:07 p.m. EST Dec. 26) with a pair of Earth remote-sensing satellites for the Russian government and 26 small satellites, owned and operated by private companies and international research organizations.

It was Russia’s fourth flight from Vostochny, which opened in 2016 to reduce Russia’s reliance on Kazakhstan’s Baikonur Cosmodrome after the fall of the Soviet Union. Tucked inside the payload fairing were the Russian government’s Kanopus-V 5 and 6 Earth observation satellites and 26 smallsats, including 12 Dove cubesats owned and operated by San Francisco-based Planet, a Earthimaging and data analytics company.

The rideshares were arranged by GK Launch Services, which was established by the Russian space agency Roscosmos last year to sell Soyuz-2 launch services from Baikonur and Vostochny. The Kanopus-V operation marks GK’s first mission. Another piggyback rideshare is expected in the first half of 2019 and two dedicated Soyuz flights are expected in 2020.

The road to the launchpad began before dawn on Dec. 24 in the midst of Siberia’s winter, with predawn temperatures of minus 36F. It was only a few degrees warmer when the rocket blasted off for launch on Russia’s 17th and final flight of the year.

The 17 orbital launches, one of which failed, tied 2016 for the country’s lowest flight rate since 1961.China, which was scheduled for its 41st flight of year on Dec. 29, finishes 2018 ahead of the U.S. in orbital launch activity for the first time since 2012. United Launch Alliance (ULA) is aiming to close the year with a final Delta IV Heavy flight, which would be the 35th U.S. orbital launch.

SpaceX accounted for 21 of those flights, including the Dec. 23 launch of the U.S. Air Force’s first GPS III satellite.

ULA has completed eight flights, with a final mission for the National Reconnaissance Office planned for no earlier than Dec. 30. Rocket Lab flew three missions, and Northrop Grumman flew its Antares rocket twice for NASA International Space Station cargo runs. All the flights were successful.