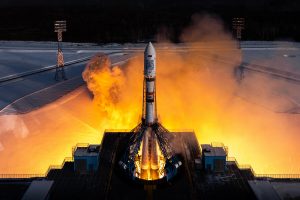 San Francisco-based Planet has traveled the world researching and booking launches for its Dove, SkySat and RapidEye Earth-imaging spacecraft, a 150-member network that is currently the world’s largest satellite constellation.

The piggyback rides were arranged through a new Russian company, GK Launch Services, established by the Russian state space corporation Roscosmos to market Soyuz-2 for orbital missions launching from Russia’s two civil spaceports—the new Vostochny complex, which is still in development, and leased, legacy facilities at the Baikonur Cosmodrome in Kazakhstan. The Dec. 27 launch from Vostochny, which delivered two Russian Earth-observation satellites into orbit, was GK’s commercial debut. “This is a first and very important step for us,” says CEO Alexander Serkin.

The Dec. 27 launch was Planet’s fifth in 2018. “It doesn’t really matter to us where we fly from,” says Safyan. “Soyuz is definitely one of the more competitively priced launchers. And Russian launchers have such incredible heritage. When it comes to reliability, in most cases, Russia presents a very strong case compared to a new launch provider just getting off the ground.”

GK is new in name only. The “G” stands for parent company Glavkosmos,

founded in 1985 to market Russian rocket and space technologies to

international customers, and the “K” is for partner Kosmotras, a Russian-

Ukrainian company set up in 1997 to sell rides on Dnepr, a

“In the past, Russia has had challenges with schedules, especially when [a

mission] is tied to a federal satellite launch,” Safyan says. “I think GK

signing purely commercial Soyuz launches will decouple them from federal time lines, and that might improve performance schedules.”

“The formation of GK Launch Services solidifies Soyuz [services] geared toward serving the commercial market,” Safyan adds. “Part of that is price competitiveness, part flexibility and how they work with small satellite operators, especially how satellites are accommodated on an upper stage and what type of upper-stage maneuvers they are willing to perform for smallsats, such as if the primary customer is going to a very high altitude, would they do another burn . . . to deliver to a lower altitude. Those types of things are useful and important.”

year—and SpaceX’s Falcon 9, though that booster has a heavier liftcapacity

“Our pricing per kilogram is competitive,” adds Solodovnikov. “Soyuz pricing is a bit lower, but our competitors can be flexible when it comes to winning a contract or getting a payload aboard. We believe $48.5 million is a fair market

price, but if we see any ways to make it less, we will try to go for it.”

Overall, the Russian launch industry has been in a slump for the past several years. The Dec. 27 launch was the last of 17 orbital launches, one of which failed, in 2018, tying 2016 for the country’s lowest flight rate since 1961. (Soyuz launches by Arianespace are not included in Russia’s tally.) In contrast, the U.S. launched 34 orbital missions in 2018, all successfully, its busiest year since 1998, and China finished the year with 39 launches, one of which failed, eclipsing its 2016 record of 22 flights.

The primary goal of the Soyuz-2.1 mission, which lifted off from the icy, windswept plains of Vostochny at 11:07 a.m. local time Dec. 27 (9:07 p.m. EST Dec. 26), was to deliver the Kanopus-V 5 and 6 Earth-observation satellites for the Russian government and 26 small satellites, owned and operated by international research organizations and private companies, including Planet. It was Russia’s fourth flight from Vostochny, which opened in 2016 to reduce the country’s reliance on Kazakhstan’s Baikonur Cosmodrome after the fall of the Soviet Union.

In 2019, GK plans a second Soyuz ride-share mission from Vostochny (a launch date for the primary payload, a Russian Meteor-M weather satellite, has not yet been set), followed by two dedicated commercial Soyuz launches from Baikonur in 2020.

“I personally believe there currently is an opportunity every year for at least two or three Soyuz missions with Fregat ... and at least one opportunity [per year] of Soyuz without Fregat for those customers that require dedicated launches,” says Serkin. GK anticipates the global launch market will be worth $71.2 billion through 2028.

—With Maxim Pyadushkin at Vostochny Cosmodrome