We visited our partner, JSC Scientific Production Association named after S.A. Lavochkin (NPOL), specifically the Fregat upper stage manufacturing facility. Fregat is a universal upper stage, which can be used as part of a medium and heavy class launch vehicle. The Fregat remains the only upper stage in the world that can place spacecraft into 3 or more different orbits in a single launch. The upper stage was developed in the 1990s by NPOL on the basis of the propulsion system of the Phobos automatic interplanetary station. In addition to the basic version (including Fregat-M), Fregat-SB and Fregat-MT modifications were also created.

The upper stages are used in the launch vehicles as an additional stage. They ensure spacecraft injection into a wide range of near-earth orbits, as well as interplanetary trajectories. The standalone upper stage control system provides a solution to the navigation problem starting with the LV lift-off, which ensures high accuracy of the spacecraft launch. The Fregat upper stage can achieve the launch mission target using its own available performance margins.

To date, more than 70 Fregat upper stages have been launched. NPOL employs more than 4500 people. 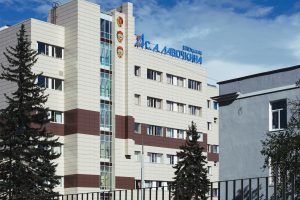 NPOL is a leading organization in the space-rocket industry for the development, manufacture and practical use of automatic space systems and systems for fundamental scientific, astrophysical, planetary research, and Earth remote sensing, as well as upper stages for the launch of spacecraft to the near-earth orbits and Earth escape trajectories. 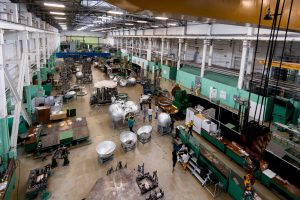 View of the Fregat tank block production shop from the overhead crane’s cabin. Different parts of the Fregat upper stage are produced in different workshops in the territory of the enterprise, and the final assembly takes place at the Fairing and Upper Stage Final Assembly Shop. 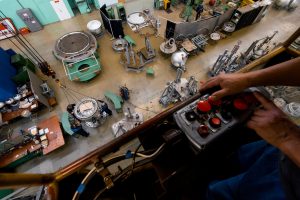 The basis of the Fregat design layout is a block of tanks, built according to a monoblock pattern. It has a torospherical configuration consisting of six welded spherical tanks separated by spherical bottoms. Four of them are tanks for oxidizer and propellant, two tanks accommodate instruments and equipment (one of them is hermetically sealed). The photos show the tank block manufacturing process. 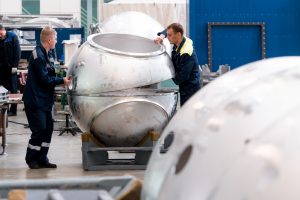 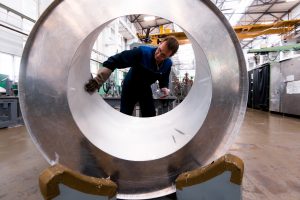 Welding of Fregat propellant tank elements.  Argon-arc welding is used, including in vacuum chambers. Chemical milling is also performed to reduce the weight of the structure. 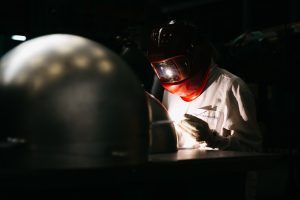 Dressing of the Fregat tank side welding seams. 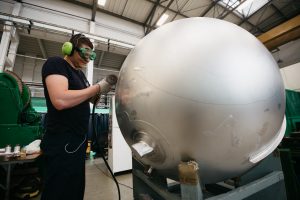 The enterprise is capable of producing up to 12 Fregat upper stages per year. 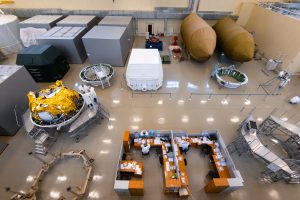 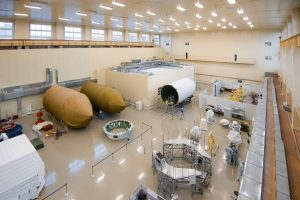 Beginning of equipment installation on the Fregat tank block. One of the tanks (hermetically sealed) accommodates the control system monoblock, including satellite navigation equipment and thermal control system fans, the other (non-hermetic) – a small instrument compartment, service units, as well as high-pressure spherical tanks of the main engine and attitude control system thrusters. 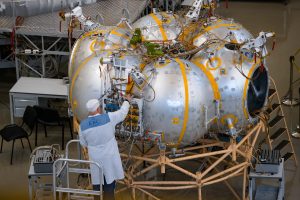 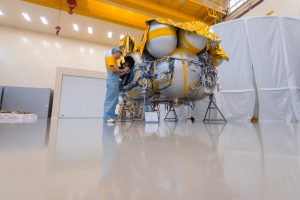 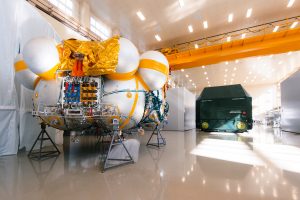 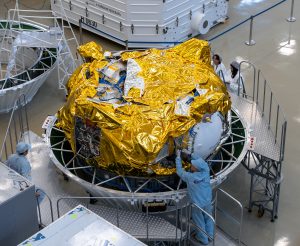 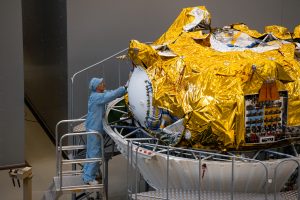 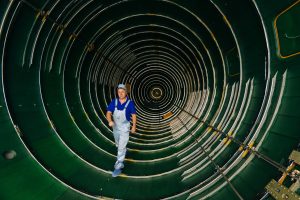 View of the Fairing and Upper Stage Final Assembly Shop from inside the fairing. 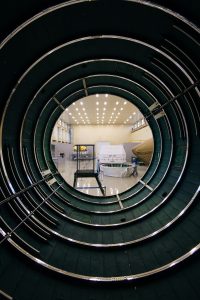 Mounting of the fairing separation system. 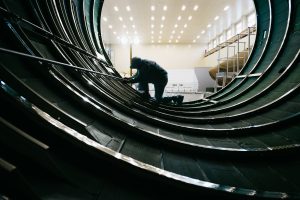 Crane operations with the interstage. The interstage ensures Fregat/LV mating and installation of the fairing. 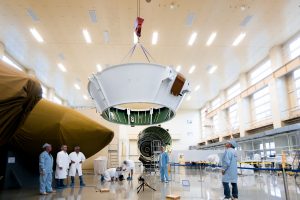 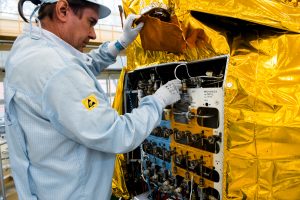 Final assembly of the Fregat-MT (with additional medium-capacity tanks). Fregat-MT is a modernized upper stage for the Guiana Space Center. The modernization consists in the adaptation of the Fregat radio telemetry system to the European ground tracking stations. 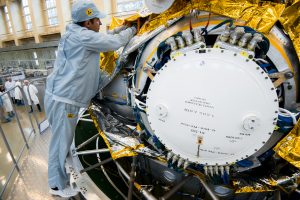 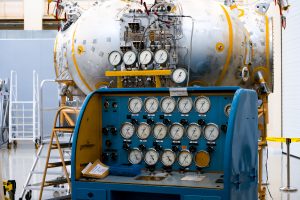 Transfer of Fregat to the final electrical tests. 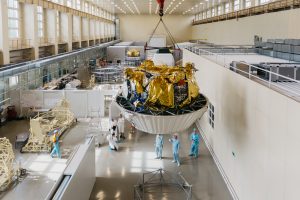 After tests, the Fregat is moved into the shipping container for packing. 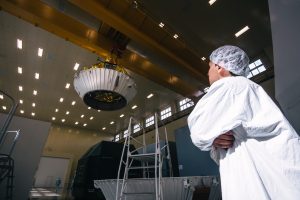 Fairing made at NPOL. 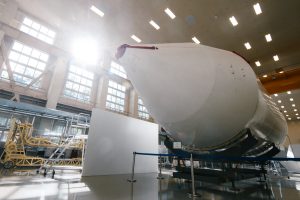 The maiden launch of Fregat upper stage as part of Soyuz launch vehiclewas performed on 9 February 2000. The payload consisted of a payload simulator and a demonstrator intended for experimental deployment of the inflatable re-entry and descend technology system.

The images show the Fregate and payload layout under the head fairing of Soyuz-2 LV for a typical cluster mission. 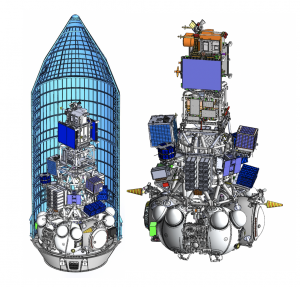 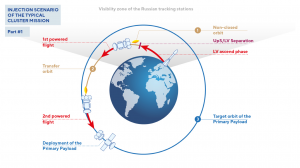 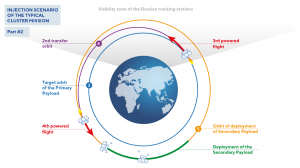 The next image shows further process of the payload delivery into orbit. The Fregat engine can ignite up to 7 times. Moreover, the Fregat in-orbit life is up to 2 days. On completion of the payload injection mission, the Fregat upper stage conducts an orbit disposal maneuver or deorbitation to splash down in the World Ocean area. 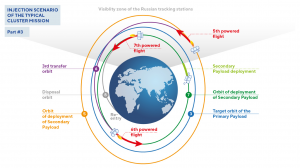 Interesting facts about the enterprise:

NPO Lavochkin is named after Semyon Alexeyevich Lavochkin, who was born in Smolensk on 11 September 1900. Lavochkin got education of an aerospace engineer and worked in various design offices in Moscow. He designed a high-speed fighter aircraft “K”, which was later assigned the I-301 index and produced at 6 plants at a time. During the years of the Great Patriotic War, the Lavochkin Design Bureau developed several production fighter aircraft. The designer’s school created by S. A. Lavochkin continues to exist today.

There is a museum of Lavochkin Scientific and Production Association on the enterprise premises, which occupies the ground floor of a separate building. It’s been located there since renovation in 2012. The main exhibition area is 900 sq. m., and the exhibition hall area is 100 sq. m. The museum collection includes 26 spacecraft, among which are the original recovery capsules of the Luna-16, Luna-20, and Luna-24 stations and also a flight model of the Lunokhod-3 rover and its lander engine.

Mission of NPOL: Combining innovations, experience and the creative potential of employees, we carry out complex decisions on the conquest of interplanetary space and launch services for the exploration of adjacent and deep space. We’ll make the unknown useful for mankind.

GK Launch Services is an operator of commercial launches. The company was established by the decision of Roscosmos and is authorized to conclude and implement commercial contracts for the launch of spacecraft using Soyuz-2 family launch vehicles from the Russian launch sites.
Previous news Next news
23 January 2020 PREPARATION FOR THE FIRST COMMERCIAL LAUNCH OPERATED BY GK LAUNCH SERVICES IS AS SCHEDULED
13 March 2020 RUAG SPACE TO SUPPLY PAYLOAD ADAPTERS AND SEPARATION SYSTEMS FOR THE SOYUZ LAUNCHERS